September 21, 2011
I tried to make Pear Jelly on Sunday while I was making Pear Sauce. I knew you could make apple jelly with the cores and peels of apples and I was pretty certain I could do this with pears. 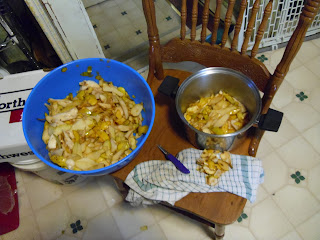 I had found a recipe on the internet for Pear Jelly that stated that pectin would not be necessary for this jelly because of the natural pectin in the pear. I had never heard of pears having pectin. I should have listened to myself at this point and did more research. I did not. The original recipe for Pear Jelly was this:

This sounds suspiciously like my apple jelly recipe so I should have been more suspicious. I was not. My mistake.

I cooked my pear peelings and cores, minus the stems and blossom ends, in two cups of water to have more than 4 cups of juice. 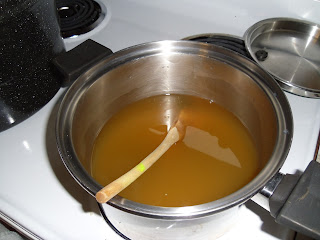 To the juice I added the sugar and lemon juice. I heated the juice mixture up to boiling and continued cooking.   It appeared to be thickening so I took the pot off of the heat and did the spoon sheeting test. Nothing. Just slid right off the spoon. Hmm...

So I cooked the jelly mixture some more (15 minutes?). I took off the heat. Nothing. Repeated the process. Nothing. I broke out the box of Sure Jell. I read their instructions on gelling jelly and how to fix ungelling jelly. 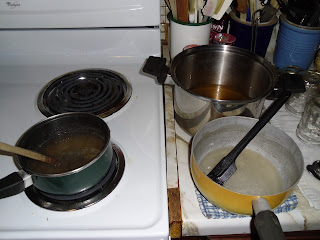 I did what they said. I tried a trial batch and stuck into the refrigerator. After a day, the jelly appeared to be thickening. So I did the rest according to their instructions. I canned it and processed it. 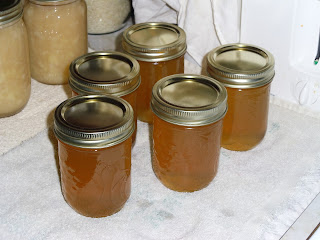 Beautiful, lovely goldenness, right? Looks good, not gelling. I have put all of them in the fridge for now, but I would appreciate any suggestions on what to do with ungelled jelly.
I am very disappointed, by the way. I was really looking forward to pear jelly!
Thanks for reading and have a great day!