January 23, 2012
I know, I know. It is a day late. But due to the lovely weather we were having over the weekend in north Iowa and southern Minnesota, I got to stay an extra day at Rob's house. I missed my kids like crazy, but it was nice to spend some extra time with him too.

This week went by in a blur! I am struggling just to remember what happened when! We stayed mostly healthy with only Shali coming down with a nasty cold in the middle of the week. While probably not the best thing, I know she has no problems drugging herself up to get rid of it! We are switching to less toxic medications, but I cannot find a good replacement for Aleve and Advil. The hunt for this is on!

Shali also only had one basketball this week, but all the way over in Everly! Heck, that is only 20 miles from where I grew up. They didn't win which was a bummer, but they played hard and she played which was great! I also got to see my parents and my grandma which was also great!

We got a snow day on Friday which the kids and myself loved. We had a good time staying nice and cozy in the house while we got 7 inches of snow outside. We made snow ice cream which is a real treat seeing that we need snow to make it! The downside was that the basketball game was postponed and so was the girls and boys dance routine for danz squad. I hope they make that up as we all look forward to it.

Saturday was District Individual Speech at Forest City. The Readers Theater group received a I rating which means they will go to Dubuque. Shali was part of this group. Jordan was part of the group that did a Short Film and her group received II rating. Shali surprised me Thursday morning when she said she was doing speech! I didn't think she ever would! I knew Jordan would because she loves things like that. I loved speech in high school and had hoped my kids would too. 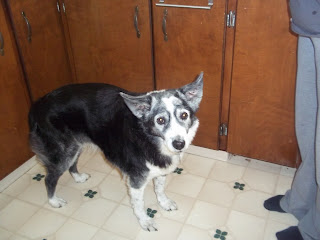 Saturday also saw me taking Angel (the dog) to Rob's house. She is really his dog, but due to the truck driving job he has now she cannot ride in the truck with him like she has been. We love having her here and spoiling her quite shamelessly! He is home for a week so back to Daddy she goes!

I think that might be all that happened, but even Jordan agrees that it was a really busy week and she can't remember what all happened either!

Yeah, not a whole lot. Maybe this week will be better!

Thanks for reading! Have a great day!