What Is Motivating Me To Prep Now? A Story of Losing Interest and Getting My Prepping Mojo Back! 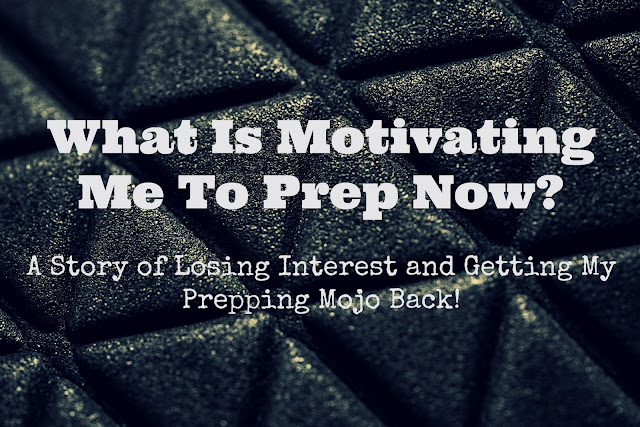 I have a renewed interest in prepping.

But, Erica, I thought you were a prepper!

That happens. Preppers sometimes need a break. They lose interest a little bit. They get burned out. Family and job situations change. They need to reassess their situation. They move to a different area. The reasons are usually personal.

Sometimes those reasons aren't always personal. They look at the big picture and feel some security in the world. They thought there might be a war or crisis in their area or country and now the threat is gone. They liked the people in power and felt comfortable with the direction of the country. They didn't feel the need to prep anymore.

I admit I was caught up a bit in the election and post-election. I didn't care for any of the candidates, but I chose the one who was most aligned with my views on several issues. After the election, I thought with this guy in power, maybe America can be strong country again. He is a strong leader and businessman. He is making mistakes and learning the job, but he is going to have a rough time of being President.

However, he is not the reason for my renewed interest in prepping. The government is. In particular, Congress is. Our Congress (both houses) are going to be the ones that take down our country. They are just a bunch of power hungry, power drunk elected people who don't give a damn about the American people. Their carelessness, lack of empathy, and selfishness is a detriment to our government and to us. A few of them are in touch with their constituents and know what is going on. Most of them don't care. Quite a few of them are so out of touch with the reality of living and earning a living in America.

They are one of the main reasons I prep now. Every day, the news and social media is plastered with their ineptness. They do not know what is best for our country. They just know who and what is going to line their pockets and that is who they serve. Do you think they care about you? Only during election time do they care.

However, I have lost respect for our governing leaders. I have become disgusted with the multitude of laws and bureaucracy that have entangled our services and our ways of life. The tickle down effect from Congress has infiltrated our state, county, and city governments. Just because you own property and pay property taxes (legal theft) doesn't mean you have the right to do as you please on your own property. That is wrong, folks.

That is why I prep now. This whole system(s) of government are going to implode sooner than later. What we have is not sustainable. The whole system(s) need an overhaul and that will also hurt a lot of people. In the process of imploding and overhauling, we will all be left to fend for ourselves. Worse, we might all be under martial law.

I prep so I don't find myself in that situation. When the government decides to implode, I won't be one of those who will be lost and destitute. Although those people will be a threat and a dangerous one at that. Mothers who have hungry children will definitely be a threat and a danger. They might even cause martial law because of their desperation.

Does our government cause you worry? Does our country give you sleepless nights? What has gotten you back into prepping? Let me know in the comments!